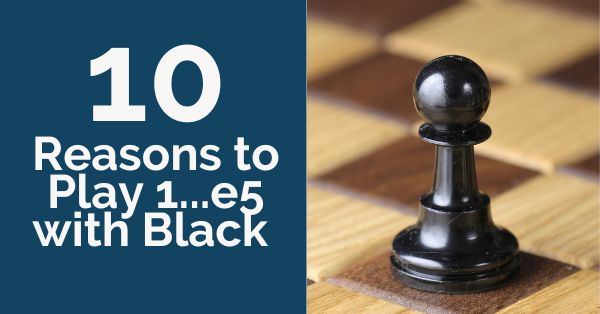 1…e5: “What should I play against 1.e4?” is a big question when creating your opening repertoire with the black pieces.

There are a number of good openings for black, with the Sicilian (1…c5) being the main choice by the second player.

The answer to this question depends on many factors, but two of the main ones you need to take into consideration are your style of play and the amount of time you can invest in learning an opening. There is no secret that the Sicilian, for example, requires a lot of memorization, as there is a lot of theory and white has a number of choices to play against it. On the other hand, it could be a good choice if you are a player who likes dynamic positions.

If you would like to reply 1.e4 with 1…e5, you should know that here too there is a fair amount of theory to learn. White has many options right from the second move, where probably the most aggressive one is 2.f4, the King’s Gambit.

Especially here, you will need to know your theory, as white can quickly get a lot of activity. On the 3rd move, after 2.Nf3 Nc6, white has again a few options. The main ones are the Spanish or Ruy Lopez Opening (3.Bb5), the Italian (3.Bc4), and the Scotch (3.d4), but white can try other moves too. There will be some work to be done, but answering with 1…e5 has many advantages.

1. You will get a repertoire that you will be able to play for a very long time.

In my opinion, this is one of the most important reasons to take up this opening. It is a classical opening, where black takes control of the center immediately and develops the pieces on active squares. Black follows all the general principles in chess, doesn’t give white too much space, and has a harmonious set-up.

This is another very important factor when choosing an opening. You don’t want an opening that can be easily refuted or where white can easily get a pressing advantage. Thanks to the harmonious development, black doesn’t have any big problems to solve. Black has no weaknesses in his position, which makes it difficult for white to breakthrough. In many lines, there is a lot of maneuvering involved, both players trying to create some targets in the opponent’s position.

3. It is an opening that gives you good fighting chances with black.

If you are trying to improve and are looking for a good opening to play against stronger opposition, 1…e5 is a very good choice. As mentioned previously, it is a sound opening, so there are no big surprises white can prepare. Apart from this, the middlegames are complicated and you are playing for all three results. This is also one of the reasons why 1…e5 has become such a popular opening at the highest level. If we compare it to the Sicilian, for example, it is easy to see how white’s options are much more limited.

Against the Sicilian, white has a wide number of set-ups and many of the new ideas are still found. It’s never easy to meet a new move over the board; you start wondering what the opponent has prepared, what his/her ideas are, and waste a lot of o time trying to come up with the best reply. One more thing to note in the Sicilian is that white can go for deeply theoretical lines whereas black will need to know very well what to do. In some of the most complicated lines, one wrong move is enough to get a much worse position.

When playing 1…e5, black gets more control over the game and avoids situations where the opponent can bring some deep home preparation. The lines are less forcing and black has lots of options to choose from, which brings me to the next advantage of 1…e5.

Black has many good options against every opening that white chooses. Against the Ruy-Lopez, for example, there are plenty of set-ups to choose from. As soon as move 3, black has an important choice – to go for the Berlin (3…Nf6) or for the classical 3…a6. Deeper down the lines black is again faced with some good choices. In the 3…a6 line some of the most famous lines are the Marshall and the Breyer. Instead of playing two different openings, here you can have a wide repertoire inside only one opening. If you feel that the opponent might have something prepared against you, you could easily play a different line than the one you usually do.

5. It is suitable for players of every style.

If you are a positional player, you will surely find a line that works with your style inside 1…e5. There are many lines that require good positional understanding, a lot of shuffling the pieces around, and trying to get a small advantage.

If you are a more aggressive player, there are interesting options for you as well. If we think about the Ruy Lopez, the Marshall Attack is known to be a very dangerous weapon for black. In exchange for a pawn, the second player gets a lot of activity and there are many games that end in brilliant attacks against the white king.

6. 1…e5: Even though this is a very old opening, the positions are very rich and even today the players still find new ideas.

The Spanish is an opening that has been played since the 16th century and you could think that both players have exhausted all the possible tries. That couldn’t be further from the truth. New little ideas are still found in the battle for a small advantage.

7. The middlegames arising from 1.e4 e5 are complex and need to be studied well.

As mentioned before, you will find both positional and active play. To understand well how to play them, you will need to see a lot of games and analyze them well. All this will improve your overall chess understanding and can help you improve your play.

8. 1…e5: By studying this opening in-depth you will not only improve your positional play but also your tactical knowledge.

There are some common tactical motifs that you will come across and learn from the games played in this opening. By learning them you might get an easy win or spot tactical threats that you might have not been aware of from your opponent.

9. It is a very popular opening at every level.

Anybody can answer with 1…e5, from beginners to the top Grandmasters. The fact that we can see it at the highest level shows that it is а reliable, but at the same time fighting opening. Many times players choose who want a risk-free position, but one that is still complicated enough to give them chances to play for a win.

10. 1…e5: It is the oldest opening in chess and there are many model games you can study and learn from.

Even though there are also plenty of very good recent games, the classics should still be studied. You can learn the typical plans or discover interesting ones that are not so popular anymore.

Looking for more on 1…e5 with Black? Here is the Complete Guide.