10 Ways to Train Your Attacking Chess at TheChessWorld.com 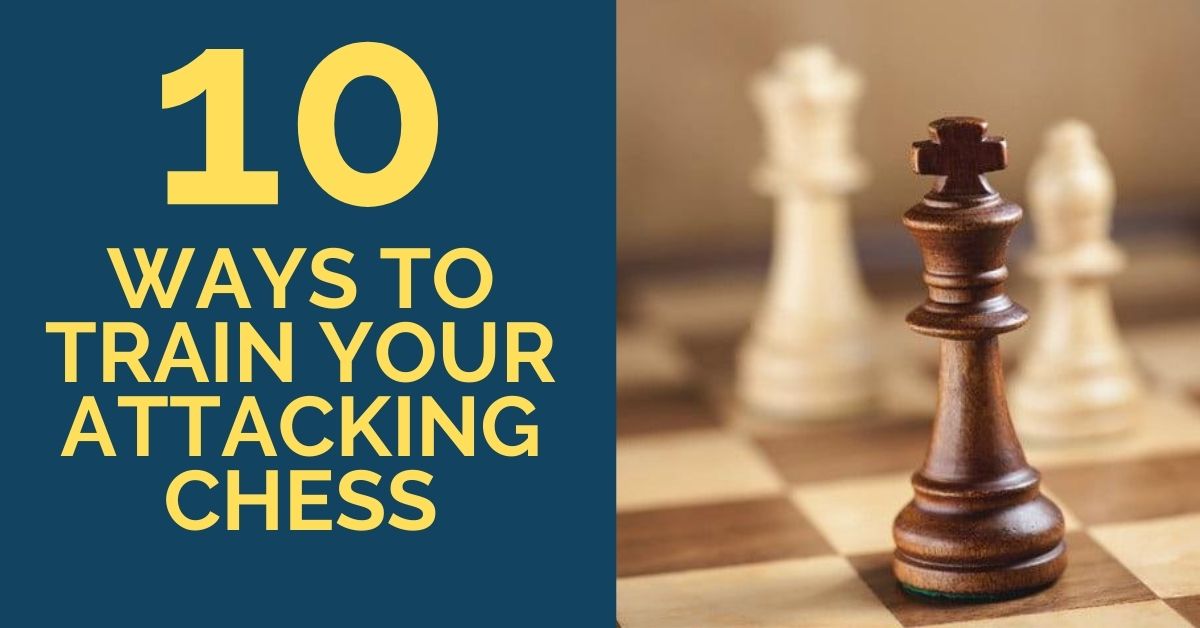 Chess is a versatile and beautiful game. There are many aspects of it that people find interesting, but the attack is the most notable one.

Attacking players have always been admired in the chess world. Their bravery, aggressive play, brilliant combinations, and stunning results have always attracted many fans. Some players have never achieved any significant results over the board but went down in chess history thanks to their outstanding courageous games.

But one should develop their attacking skills not only to be respected: it is beneficial and necessary for chess improvement. Better attacking skills can compensate for weaknesses in the other aspects of chess. This works especially well for tacticians. But even if you are a positional player, you still will quite frequently get into situations where you have to play energetically. Sometimes going for an attack is the only correct plan in a position. Moreover, the attack in chess often comes as the result of a good strategy; it is the final point. That means the outcome of most of the games often depends on the player’s ability to attack.

Great attacking skills will make you a dangerous opponent for everyone. It will help scoring more points and win games faster. Apart from that, it is more interesting and fun to play attacking chess, at least from time to time.

So everyone should train their attacking skills to be more successful over the board and here are 10 ways how to do that.

1.  Go over games of attacking players

There are many famous attackers. You can review their games and pay attention to the way they were building and developing their attacks. Do rush through the games, take your time. Try to guess their moves, find the reasoning behind them.

Understand the ideas and plans. Some people may find this too difficult, boring, or time-consuming, but this is one of the most effective ways of training.

To learn how to attack, you can go over the games of Alexander Alekhine, Mikhail Tal, David Bronstein, Rashid Nezhmetdinov, Garry Kasparov, Judith Polgar, Alexei Shirov, Veselin Topalov, just to mention some.

Many of the above-mentioned attacking players have written books with collections of their best games.

Reading such books will help you inherit their fighting spirit and attitude.

Still, not only read the moves and annotations but also think on your own and guess the moves.

Later, you will be able to compare your thoughts with the thoughts of the great players by reading their annotations.

It is hard to learn a different style or acquire a new skill without any practice. Of course, you should try to play some games in an attacking way.

But what to do if you can’t get any attacking possibilities?

The King’s Gambit is the first opening that comes into consideration, but of course, that is not everyone’s cup of tea. There are many other openings that lead to fierce fights as well. Also, you are not obliged to attack in every single game.

Play the Sicilian Defense with both colors; try the King’s Indian Defense as Black or the King’s Indian Attack as White. You can also adjust your current openings a little bit. For example, if you play the Queen’s Gambit with White and employ the minority attack, try to play the plans with the queenside castling instead.

This kind of training is also one of the most useful ones. You can play training games starting from certain positions. These positions you can choose from the games of attacking players. Try to find the most interesting attacking moments.

This way you will get a better feeling of the arising complications and ideas and get yourself ready to attack in important tournament games. The strength of your sparring partners can vary. You don’t need to search for someone exactly of your level.

It is always useful to analyze your own games. This way you learn from your mistakes and get a better understanding of your own strengths and weaknesses. Here let’s see how this can help with our topic.

If you played an attacking game then you can see if you were choosing the right ways to attack and where you could possibly do better. If it was a rather positional and maybe even boring game, you still can try to find where exactly you could make it sharper and spice things up.

Attacks are usually accompanied by many tactical possibilities. You have to be able to calculate variations properly to choose correct attacking continuations.

Seeing tactics is important too. Most of the time attacks get finished by tactical combinations. There are many players who are good at building and developing attacks, but they can’t complete them successfully.

The reason might lie in the issues with tactical vision. They are not able to calculate the variations properly, miss winning combinations, and often even lose the games started with promising attacks.

Sometimes direct and typical attacking ways do not work well. You often need to be creative and imaginative to complete an attack. Some of the above-mentioned methods of training will help you develop these qualities.

Apart from that, you can solve endgame studies or artistic puzzles such as mate in 2 or 3. They are quite complicated and often challenging even for grandmasters.

Defense is an important skill, but what does it have to do with the attack?

Sometimes there are many active continuations in a position. In your games, you should be able to find the most difficult ones for your opponents.

If you choose the wrong path, your opponent may find a defense and neutralize your initiative. This is why it is useful to learn how to defend.

This skill will help you foresee your opponent’s defensive ideas and see the better continuations for the attack.

There are many books, videos, articles, courses, and DVDs designed specifically to improve your attacking skills.

This can be used as a shortcut when learning how to attack. At the same time, remember that watching or reading is not going to be enough itself. You still should go over the ideas on your own, think independently, and practice.

It is great if you can find a coach who is good at attacking chess and ask him to teach you.

Understandably, this option is not for everyone. But you can also find an attacking player in your local chess club.

Ask them to play some casual games with you or even to discuss the way they play chess. Such conversations are also quite useful: you will see their attitude and grasp some understanding.

There are many ways of training your attacking chess. You can try different ones and see which of them will prove to be more effective for you. I personally think going through the collections of attacking games is one of the best methods.

This way you will not only improve your chess but also get some inspiration from the great chess minds of the past. It will help you keep going and show better results. You can find such game selections in specialized sources too. Also, playing training games will help you a lot, especially if you analyze them thoroughly afterward.

There were many players who got rid of their weaknesses, successfully changed their style, and made huge improvements. Hopefully, this article will help some of the readers learn how to attack too!

Ready to learn the secrets of attacking chess?

Let IM Boroljub Zlatanovic teach you all about the glorious art of attack that does not simply win you games… but make you realize the inherent beauty of chess.

Want to see what’s inside?

How to Learn to Think Like a Chess Master? at TheChessWorld.com