The Caro-Kann Defense is one of the most fashionable openings nowadays both at the grandmaster and beginner levels. It is a reliable weapon that does not require a lot of memorization and usually leads to calm positional games. The good thing is that it still allows Black to play for a win: the positions are not sharp but still quite lively.

It starts with the moves 1.e4 c6 and is often considered an improved version of the French Defense. It is arguable but logical. To illustrate that, let’s compare the positions from the Advanced Variations of the French and the Caro-Kann. 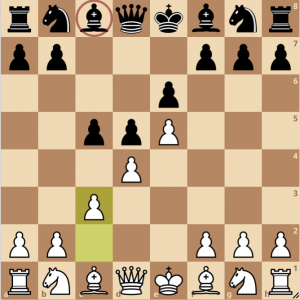 White got more space in the center but Black gets counter-play by attacking the pawn chain from the flank. The important thing to note here is Black’s light-squared bishop. It is restricted by the pawns and often ends up being the worst piece in a position. 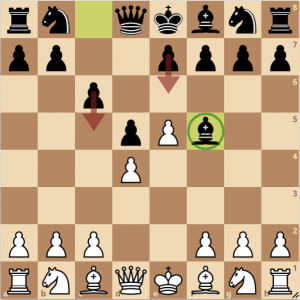 Later, Black plays …e7-e6 and starts attacking White’s pawn chain by …c6-c5. Therefore, Black wastes a tempo for playing the pawn from c7 to c5 in two moves but instead gets the bishop activated.

The Caro-Kann Defense has been popular at the highest level for many years. It has been consistently used by the World Champions: Capablanca, Botvinnik, Petrosian, Anand, Carlsen, and especially Karpov, who has played it regularly. Nowadays practically every top grandmaster has it in their repertoire. 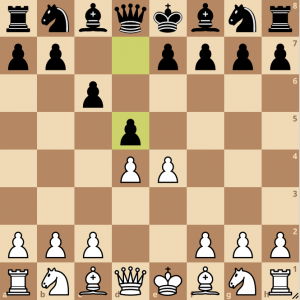 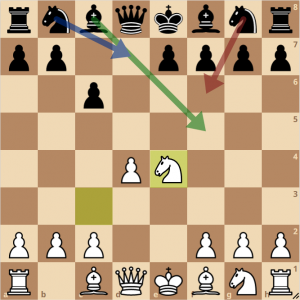 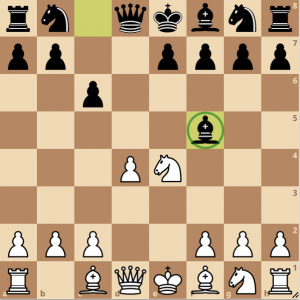 This is so far the most popular move for Black and is logical. Black’s main idea in the Caro-Kann is to solve the problem of the light-squared bishop. 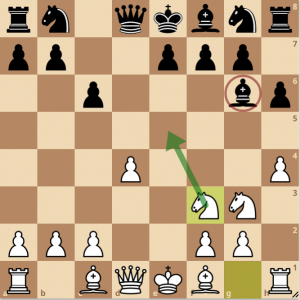 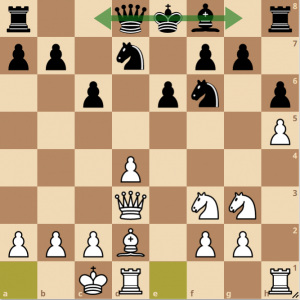 Here Black can choose the old and solid plan of castling queenside after 12…Qc7 or prefer a more modern and sharp plan with 12…Be7 and kingside castling. Look at the examples of both strategies in the PGN viewer below.

Let’s also mention that White had less popular but still venomous alternatives along the way, so be careful. 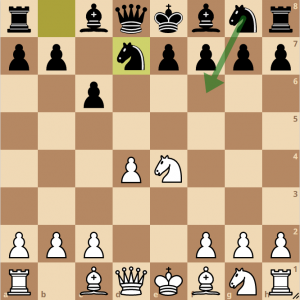 Although 4…Bf5 and 4…Nf6 are currently the most fashionable moves, the Karpov variation is still quite relevant. It usually leads to solid but a bit passive positions for Black. The main idea of 4…Nd7 is to prepare 5…Ngf6.

Warning: if you ever want to play this line make sure not to blunder a smothered checkmate after the tricky 5.Qe2. Now in the case of 5…Ngf6??, White finishes the game with 6.Nd6# 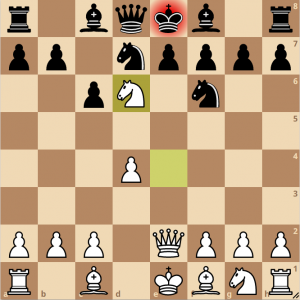 Here is one of the most famous games that started with this variation. Anatoly Karpov shocked his opponent with a strong and unusual 11th move.

This system gained a lot of popularity recently. After 5.Nxf6+, Black has a choice. 5…gxf6 leads to double-edged positions with some active play for Black but White can secure some edge.

5…exf6 is the main choice in modern practice. 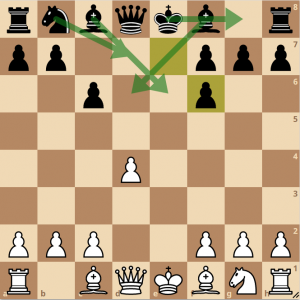 Black gets a solid position with easy development. The doubled pawns are not weak, control a lot of important squares in the center, and serve as a shield for Black’s king. The drawback of this pawn structure is that White has more pawns on the queenside and can create a passed pawn there in the future.

We briefly discussed this variation above when compared the Caro-Kann with the French Defense. Nowadays this variation is White’s main weapon at the grandmaster level. It leads to complicated positions where it is difficult to navigate for both sides.

I would not recommend playing this line as White below the expert level. 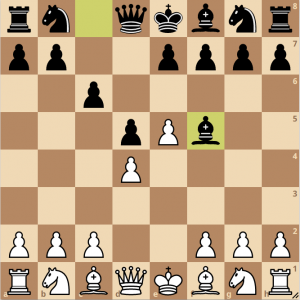 After 3…Bf5, White has a lot of options but generally speaking there are two approaches. The moves like 4.Nf3, 4.Nd2, 4.Be3, or 4.c4 usually lead to a complex maneuvering struggle. You can see how the game might continue in this case in the PGN viewer below.

White’s second approach is to sharpen the game. It can be achieved with the immediate 4.g4, attacking the bishop and launching a pawn storm. White can also prepare it with 4.Nc3 or 4.h4. 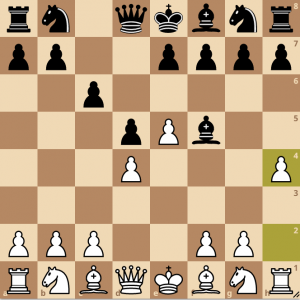 The latter move is quite fashionable nowadays and consists of a little trap: after the most natural 4…e6, Black’s bishop gets trapped by White pawns after 5.g4, followed by h4-h5 and f2-f3. That is why instead of 4…e6??, Black’s main choice is either 4…h6 or 4…h5.

Apart from 3…Bf5, Black can also play 3…c5 immediately. This variation is less popular but is still very playable and interesting.

The Exchange Variation starts after 3.exd5 cxd5 and used to be considered harmless and boring some time ago.

However, in recent years it was reassessed and now many strong grandmasters use it to play for a win. The arising positions often resemble the London System and provide White with chances to obtain a small but stable advantage. 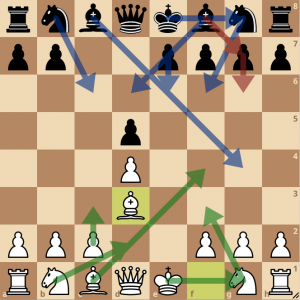 Unlike the Advanced Variation, this line seems to be playable at any level. After 4.Bd3, White would love to put their bishop on f4, the pawn on c3, the knights on f3 and d2, castle kingside, and later develop the initiative in the center and the kingside.

One of Black’s possible plans would be completing the development and going for a minority attack on the queenside with …b7-b5-b4 in the future.

This is a sub-line of the Exchange Variation, but it leads to different positions. It starts after 3.exd5 cxd5 4.c4. 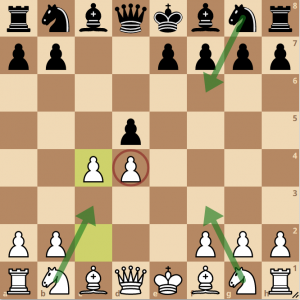 The c4 and d5 pawns are about to get traded, after which the d4-pawn will become isolated. Many openings lead to such positions with an isolated queen’s pawn (the IQP), so studying the Panov attack properly will help you in many other lines.

The Fantasy Variation starts with the move 3.f3 when the following position arises: 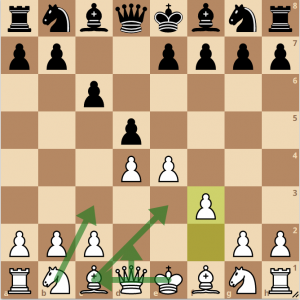 White strengthens the center with the pawn and prepares to castle queenside and launch a pawn storm on the kingside. This line is not very popular, so you will not meet it as often as the above-mentioned variations.

However, recently it was employed by Maxime Vachier-Lagrave in the Candidates tournament 2021. He scored a quick win against Alekseenko. You can see this game and a better example of handling Black’s position in the PGN viewer below.

White can also delay the d-pawn push for a bit and start with developing the knights. After 2.Nf3 d5 3.Nc3 or 2.Nc3 d5 3.Nf3, the same position appears. 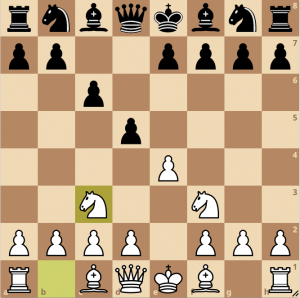 After 4.Nxe4 Nf6, Black hopes to get a position similar to what we saw in the Classical Variation. White can deviate with 5.Qe2 Nxe4 6.Qxe4: 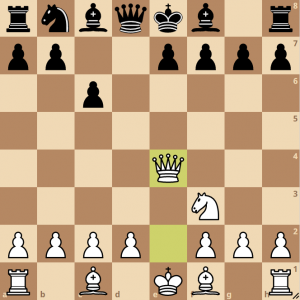 Now Black has a lot of different options. For example, 6…Qd5, offering a queen trade and preparing …Bf5.

White has a broad choice of interesting systems against the Caro-Kann, but as you could see, Black has a lot of good ways of meeting all of them. It is a reliable opening that can be played at any level.

Hopefully, this article will help you add this defense to your repertoire.

Want to add Caro-Kann to your opening repertoire?

In this brand-new Mastery Course, you get 10 hours of HD video training and complete PGN files containing *every* Caro Kann game the Russian chess legend ever played. 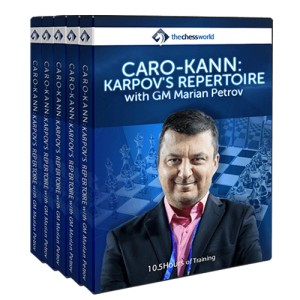