Top Posts
Play g4 Gambit vs. Philidor with GM Misa...
Fantasy Variation vs Caro-Kann with GM Pap [TCW...
Pirc Defense: Complete Guide for Black
10 Must-Know Middlegames for Club Players
Why do you need a chess coach?
How to Win in Equal Positions: for Club...
Portable Chess Game Notation (PGN): Complete Guide
How to Attack Like a Chess Master? The...
10 Chess Principles Every Club Player Must Know
10 Reasons to Play 1…e5 with Black
Home Blog How to Win in Equal Positions: for Club Players
Blog

How to Win in Equal Positions: for Club Players 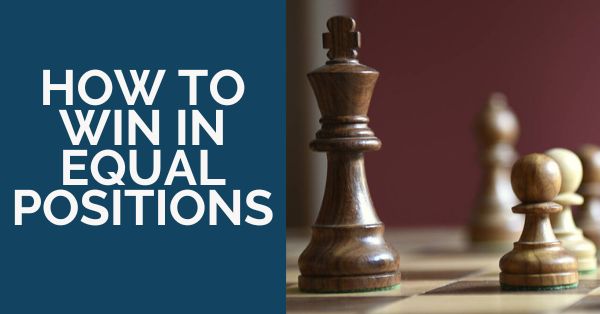 How to Win in Equal Positions: Winning a chess game is not an easy task. The days when you could win a game out of the opening are long gone. Everybody is very well prepared and the amount of information available on openings is overwhelming. Powerful computers deeply analyze most openings, which makes novelties much more difficult to find.

However, choosing the right opening for you does play an important role in how the game will unfold. The first step towards getting a good game is achieving a playable position that you feel comfortable with. A complicated middlegame, with little simplifications, where both players need to show a good understanding of the game is the kind of position to look for after the opening.

In general, if both sides play the opening correctly, you will get a roughly equal position or one with a small plus for one of the players (most commonly white). From that moment on, each player will need to show their skills and try to pose problems for their opponent. There is no magic formula that will get you the full point, but the following points could help you provoke mistakes in your opponent’s play and increase your advantage:

1. Equal Positions: Study well the middlegames you play most.

It is very important that you know what to do once the opening is over. For this, you need to see a lot of games and understand the typical ideas in the positions you play. You can do this by searching for games right where your theoretical line ends. Choose the ones you like most and save them to your database, so you can access them any time you need to see them again. If there’s a particular structure that you play often, then you can search for model games containing that structure. It doesn’t have to be the same position that you have right after the opening; seeing different ideas in different set-ups can help you come up with interesting ideas during your games.

Completing this step will not only help you better understand the positions you play but also win time on the clock. You won’t have to figure the plans out over the board, you will most likely only need to check the right way to execute them and figure out what your opponent is trying to do.

2. Try to create imbalances in the position.

Symmetrical positions, for example, are very hard to win. There are no weaknesses in the pawn structure, the opponent’s position is solid and it’s hard to find how to break through. Unless the opponent makes a big mistake, the position should stay equal for a while. One step to try and create some pressure against your opponent in such positions is to create a small change; something that will break the symmetrical character of the position and will give you something to play against.

For example, this could be a change in the pawn structure (provoking a pawn advance, provoking a change in the center, creating doubled pawns) or one in the material – try to trade a knight for a bishop or vice versa, depending on your position. The position could still continue to be equal after that, but now you have something to try and build on. If it’s an imbalance in the material, you could try to make your opponent’s piece worse and improve yours; if there has been a change in the structure, you could use this to try and create some weaknesses to attack in your opponent’s position.

You can’t win a position where there are no weaknesses to attack. In order to try something and be able to put some pressure on your rival, you need to first provoke some weaknesses in their position. In general, you can do this by advancing one of your pawns and using a pawn break or by provoking pawn moves with your pieces (attacks over the pawn, over other pieces, or threatening to bring your piece on a more active square, luring your opponent into advancing a pawn to stop it). The following example is from one of my games: 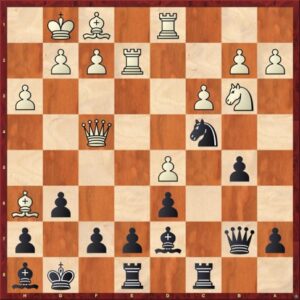 White is trying to create some play on the kingside, but everything is under control so far. The black knight on c4 is well placed, attacking b2, but everything is well defended. The position is equal, but each side can try to create winning chances on their wing. I continued with 20…a5! Without any real weaknesses to attack in white’s position, white limits black’s counterplay. This move is preparing …a4 followed by …a3, weakening the long diagonal.

If in this position white doesn’t really have a way of avoiding creating weaknesses on the queenside, the following example is very instructive: 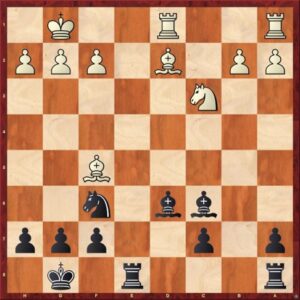 The position in the diagram is equal. Black’s pawn structure is slightly worse, but white still needs to find good squares for her pieces. Black’s next move is very natural, but sneaky at the same time – 18…Rab8, improving the rook and threatening to win the pawn on b2. White now needs to choose between defending the pawn with 19.Rab1 or pushing it to b3. Both moves keep the position equal, but advancing the pawn to b3 gives black more practical chances, as now the dark squares on the queenside can become a target for the black pieces.

After provoking 19.b3, black played 19…Rbd8! Improving her rook to a better file. The rook has completed its task on the b file and is now on the d file. A second key moment came a few moves later, after 20.Be1 g6 21.Bc2 a5 22.Rd3 Nh5! The knight is headed to f4, something that white can’t allow: 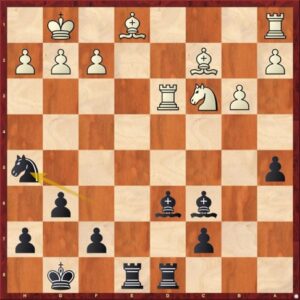 However, now the best move, 23.Bd2! (keeping the structure intact) is not so natural anymore. The game continued with 23.g3?! and black went on to win thanks to the weaknesses created in white’s position. Ironically, after provoking this second pawn advance, black moved her piece again – 23…Nf6! Was played, with the idea of bringing it to g4. Here’s the full game:

4. Equal Positions: Don’t create any unnecessary weaknesses in your own position.

As we’ve seen previously, creating unnecessary weaknesses can be heavily punished by a very strong player who knows how to correctly exploit them. Pay attention to every pawn move and don’t make any unnecessary advances that your opponent could later use against you. This is very common especially when trying to win an equal position; in an effort of trying to open or weaken the opponent’s position you can overextend and the plan could backfire.

5. Keep calm and don’t try to win the game at any cost.

Sometimes an equal position can’t be broken. Our opponent plays well and the game is simply headed towards a draw. If you can still safely pose more problems for your rival, then you can do that, but do not overdo it! Pressure as much as the position allows it; many times, out of the desire to win at any cost, players over the press and end up losing the game. They miscalculate or weaken their position too much, until the point when they cannot do anything. Try to keep your calm and cool head throughout the whole game.

5 Reasons Why Attacking Players Should Play...

10 Reasons Why Chess Psychology is a...