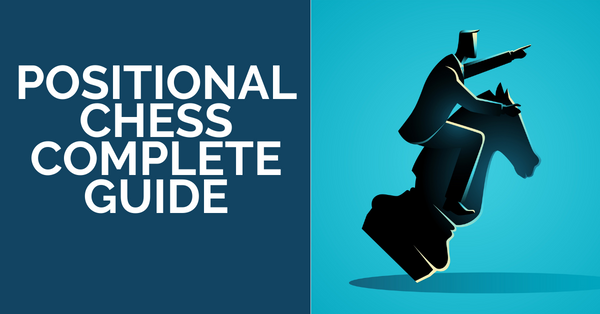 Positional Chess: To improve at chess and become a strong player, one needs to include all parts of the game in their training.

Tactics and strategy go hand in hand during a game and it is usually difficult to separate the two. One might be more present throughout a game than the other.

But, they are both needed in order to build up the game and finally win it.

Both positional and dynamic chess can be learned by going through many Grandmaster games. This is probably the most useful tool in studying chess. By seeing how the best handle different types of positions, you learn. Then, you try to mimic what they are doing in your own games.

There are a lot of positional concepts that you need to study to improve your strategic play. And, one of the most important ones is weaknesses. Understanding what weaknesses are and being able to correctly identify them during a game is an important part of the process.

It is one of the foundations of positional chess.

It is also a term that you will come across all the time when studying strategy. A weakness can be a square or a pawn that another pawn can’t be defended by another pawn.

In addition to this, it is very important that you are able to use it or attack it easily. If you can’t use a weak square for your pieces or attack a weak pawn, then it isn’t really relevant for the position you have on the board.

Why is it so important to look for weaknesses, both in your and your opponent’s camp? Because this is how you can anticipate your opponent’s plan and create one of your own.

In general, you want to use weak squares for your pieces. A piece that’s placed on a weak square in the opponent’s camp can’t be easily kicked out of there.

The most common piece to bring on a weak square is the knight. If you can protect it with a pawn and create an outpost, your piece will have more stability on that square. With weak pawns, you will want to put pressure on them and tie your opponent to their defense.

The following diagram shows an example of a weak square (d6) and the way white can use it to improve his knight from e5: 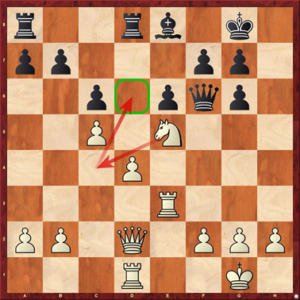 One important principle that you will learn when studying weaknesses is that weak pawns must first be fixed. And, only then you can attack them. Basically, you don’t want your target to move after you’ve spent a few moves on bringing your pieces on certain squares. Another one is the principle of the two weaknesses. It says that one weakness is usually not enough to win the game. You need to create a second target of the attack (another weakness) and attack them simultaneously.

In a cramped position, it is more difficult for the defending side to defend both flanks. So, you will eventually manage to make progress and win the game. If the weaker side has only one weakness that needs defending, then they can focus on doing that and creating a blockade for the attacking pieces.

Knowing how to play in different pawn structures is another very important step in learning strategy. Different structures require different plans and it is much easier to find the right continuation during the game if you have already studied the pawn structure you have on the board. You can start with the structures you play most (the ones that arise from your openings). But, eventually, you should study all the important pawn structures.

It is very important, for example, to know how to play in positions with an isolated pawn. 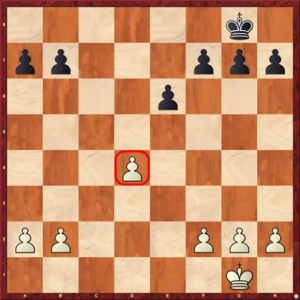 They are dynamic and very resourceful positions, where many plans are possible. Study how to play with it and then against it. Then do the same for the hanging pawns.

Other important structures are the Maroczy structure (with pawns on c4 and e4), the Carlsbad structure and the minority attack, how to play against a backward pawn, advantages and disadvantages of the doubled pawns, the queenside pawn majority, and so on. 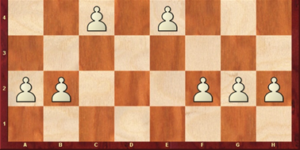 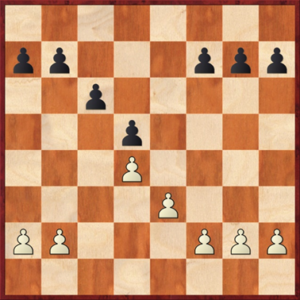 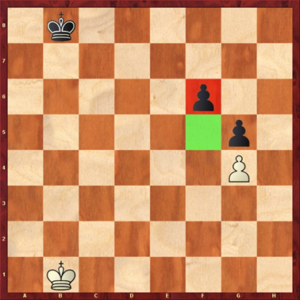 Example of a backward pawn (f6)

In correlation with the pawn structure, we have the pieces. Some pieces work better in specific structures. Knowing that it’s important to understand which ones to keep and which ones to try to trade. On the other hand, if you can’t trade the bad pieces, you have to know what you should try to achieve.

Let’s take positions where one side has the bishop pair.

The bishops are long-range pieces and they work very well in positions with an open center. So, it makes sense to try and open the center if you have them and refrain from central pawn trades if you play against them. Knights, on the other hand, are strong when the center is closed. That’s because they can jump over pieces and get into the opponent’s position easily. They are also very dangerous in the attack.

In the following diagram we see an example where the knight dominates the bishop: 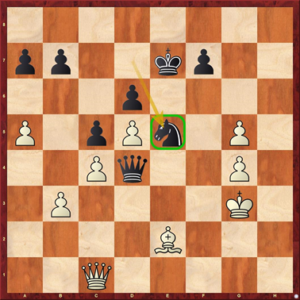 To know what to do in the middlegame, you have to be able to correctly assess the position you have on the board. All the above-mentioned elements will help you understand which side is better in a game and what direction to take in a certain position. King’s safety is one of the most important factors on the board. And, that is the first to look at when assessing a position.

Then, the position of the pieces; who has the better pieces?

Weaknesses are also an element to take into account. At the end of this operation, you should know which side has a better position and have an idea about the plans each one has available.

Understanding exchanges also plays a big role in improving the level of your positional play. Trades are difficult even at the highest level and even Grandmasters make mistakes, but you can start with some simple guidelines. For example, you want to ideally trade your bad pieces for your opponent’s strong ones. You also want to leave your opponent with the bad ones, so trading only their good ones makes sense.

You should usually avoid queen trades if you are on the attacking side. On the contrary, if you are defending, exchanging Queens can be a good defensive resource. These are just some ideas; there are of course a lot more things to take into consideration when deciding on a trade.

As you become stronger, you will learn more and more positional ideas. One of them is the positional sacrifice, where one side sacrifices material for long-term pressure over the opponent’s position.

It can be a pawn sacrifice, an exchange sacrifice (a very famous idea, used a lot by Tigran Petrosian in his games), but also a piece sacrifice in some cases.

Patience and the ability to squeeze your opponent by slowly increasing the pressure is another ability that you learn with time and after studying a lot of Grandmasters’ games.

Patience is very important in worse positions as well. Sometimes doing nothing at all is better than trying to do something, as you might end up weakening your position even more. In practice, this is very difficult, but it is a skill that you can develop with training.

10 Reasons to Work on Your Endgame...